Loki from www.SavageMojo.com drops a BIG reveal, first, right here on FCCFREEradio about what’s coming up.  It’s great news that the gang and anyone playing the Lich Queen Pathfinder path from SavageMojo will want to hear!  Check the liner notes below to know where the interview begins in the broadcast.

There was another topic besides the bombshell dropped by Loki?  Oh yes there was and it was a good one too:  What ending would you re-write?  (Open floor to movies, books, comic books etc) and Loki even gets on with a great Dr. Who answer.

Today the geeks had the good fortune to interview a real mover and shaker in the RPG gaming business from the up and coming company SavageMojo.  George “Loki” Williams (AKA Planejammer and DungeonMaster Loki) joined the geeks for an interview about the SavageMojo projects and what we can expect from the new Lich Queen series as well as other pieces of the SavageMojo line.

TrunkMonkey leads the questioning with some great questions to try to pry out a bit of hidden knowledge for people who might not yet be familiar with SavageMojo or their product line.

We look forward to having Loki on again very soon. 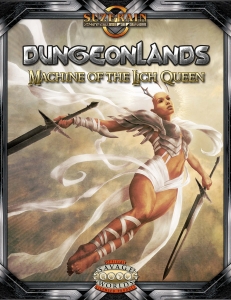 Besides SavageMojo, what about the ending re-write?

We have all been through it before.  You watch an otherwise great movie, or read a great book, but the ending stinks and kind of lets you down or can even ruin the entire movie.  There are the obvious ones over the years, but maybe some not so obvious.

Redshirt drops the bomb talking about things in this real life endings that he would change, and Dungeon Master then later follows suit and mentions not only endings he would change, but he gets really pissed off and gets himself bleeped!  First time in 30 episodes he’s had to be bleeped!

TrunkMonkey painfully reminds us about Indiana Jones and other endings that just made us groan and of course Sundance jumps in with some obscure reference to some movie that only 11 people ever watched on VHS in 1981……  With TinKnocker to round out the craziness it was all around a great time!

Visit all of our Podcasts right here: GeekLine415 Podcasts

or subscribe and or listen to us on iTunes

You can also pick up our Podcast RSS feed so anytime we post a new podcast you will find it in your feed.

00:00 — A unique intro especially for our host, Sundance.

09:00 — TinKnocker gets upset over an Alien movie

25:44 — Redshirt acts like a Redshirt and gets himself bleeped (fine incoming)

25:50 — Dungeon Master gets salty and gets himself bleeped (fine incoming) and over Dennis Haskins (Mr. Belding from Saved by the Bell)????

27:24 — Loki from SavageMojo joins the conversation

1:12:00 — Dungeon Master talks about the “weird convention of the week” and wraps it up