It’s our 100th episode!  And what a better way to celebrate then with 3 of the coolest actors on the scene today and all of us talking about that moment when a character in a movie knows he f-ed with the wrong person and the Horde Movie 2016 is full of just those kinds of moments. 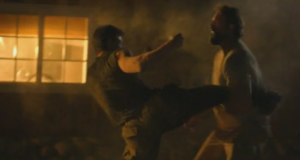 Matt Willig former professional football player and Superbowl winner turned actor, seen in the new movie Concussion and many other great films including this one.  Paul Logan, the writer, co-producer, actor and soon to be big budget action star along with the guy who waxes poetic with the even keel of a pure psychotic, actor Costas Mandylor all join us for a very raucous night.

These guys came at us and each other hard, with no mercy, and while we probably haven’t met our match, they gave it right back and some great conversation ensued.  These are 3 real guys who had a great time making a movie together and really wanted to share that joy and excitement with you.

Who is this soon to be super star Paul Logan in the Horde movie 2016?

Paul is a terrific guy.  As a former stuntman and serious martial artist, Paul brings a blend of realism to the screen we haven’t see since the old days.  He’s not afraid to get dirty in front of the camera and risk life and limb to get the shot.  With a work ethic second to none, we see Paul Logan going far.  He is in great physical shape for the Horde and can compete with an John Cena types that might be out there.  Paul brings a blend of nice, honest dude mixed with his martial arts background for a dash of bad-ass.

Surrounded by his cast of friends Matt Willig and Costas Mandylor, the Horde turns out to be a fun indie flick that you can watch.  As Paul puts it, it’s Rambo meets the Hills Have Eyes.

Matt Willig turns in yet another solid performance as Stone, but more over, what a great individual Matt turned out to be.  When you spend a good part of your adult life in an NFL locker room you can clearly handle yourself.  Matt falls right in to the conversation dropping bombs and hitting back just like we would expect.  It was a pleasure to hear Matt’s insights around acting, the movie, and his work.

And then there was Costas Mandylor, the philosopher, the gentleman, and the man that we all listened to whenever he had anything to say.  An eerie silence seemed to decend over San Francisco when Costas started speaking.  He shared his years in the biz with some great tales and lessons for budding actors, writers and directors.  Costas has seen it and done it, and we can’t wait to see more of his work.

Paul is working on a few new things and we can’t wait to see what he pulls out of his bag!

You can find Paul on Twitter @RealPaulLogan or at paullogan.net

You can find The Horde on your favorite VOD experience such as Amazon or their official website of The Horde movie 2016 at: http://www.thehordemovie.com/

Check out the official trailer for The Horde movie 2016 right here: 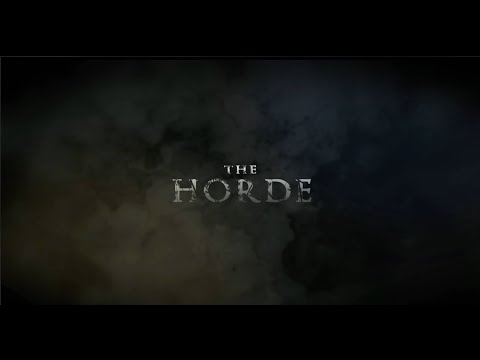 Please see my rating system below. I am not a producer, promoter, or in any way financially attached to The Horde Movie 2016 film (other than I paid to buy it)

Sit down and get ready for a mix of Rambo meets Friday the 13th meets The Hills Have Eyes! The Horde Movie 2016 is a dive in to a world of drug runners, hill folk, and a photography class outing that all come colliding together for an action/horror flick that gave me a lot I didn’t expect.

As a kind of typical slasher flick, think you’ve seen this movie before in some iteration? Quite possibly, until we add a slight wrinkle. Not all of the campers are hapless victims, and in fact, one of them is a former Navy Seal, and BAM! suddenly we change gears into Man on Fire meets the Most Dangerous Game meets Taken.

John Crenshaw (played by Paul Logan) becomes our hero and sets out to rescue his campers and rid the world of the hideous Hill People Drug, Rape and Cannibalism Cartel (that’s a joke), infamously known the world over as the HPDRCC. Logan does an excellent job with the stunts. I don’t typically expect to see many if any stunts, and if there are any it’s usually camera work, but in this case we had several well choreographed fight scenes. In particular, when Stone (Matthew Willig) squares off against John Crenshaw, the shots look great. NO WIRES. No fake camera, and we get to see just a couple of guys doing their own stunts and I think it plays out well.

The main bad guy, Cylus, played by Costas Mandylor comes off as your typical maniacal, egotistical, erudite, enlightened psychopath, and Mandylor just nails it. I really believe Costas should be the person playing Neegan right now in the Walking Dead. I buy his character even with the lack of dialog he has. He is the man in charge and you believe it throughout the movie.

The entire crew does their job, each one of them over-doing his or her role to the most annoying point where I am relieved to begin to see them get chopped up one by one. This is the point of the movie isn’t it? I don’t feel too bad when anyone dies, and some points, I’m rooting for the Hill people and I loved it! Then when I realized the hill people were sicker that heck, thanks to the role played by the immortal Vernon Wells as Earl, I begin to think they are going to get what’s coming to them in the form of a John Crenshaw knife bomb to the top of the head.

Overall, if you are looking for a FUN movie, that is not afraid to pay homage to many great horror flicks in it’s own way, then you’ll have fun with this one. The price is right at $3 on Amazon and it’s worth a Saturday night sit down. If you paid $15 to watch the Fantastic 4 that quite literally had 100 times or more the budget of this movie, and you wanted your money back like I did for that Fantastic 4 piece of garbage, $3 is a real bargain for something entertaining.

Walk in knowing what to expect, and quit expecting to get big Hollywood out of movies that are shot in just a couple of weeks, that folks barely get paid, and that isn’t the umpteenth remake of a comic book I read in grade school. These movies are supposed to FUN! Have FUN and turn off your “Critic” filter and maybe just enjoy the spread!  The Horde movie 2016 was a better piece of cinema than people are giving it credit for.

**** My rating system **** I have rated well over 700 movies on IMDb, and written reviews for quite a few. I try to take a scientific approach and as a result, my ratings fit a bell-curve pattern as would be expected over a large sample set. I am slightly skewed on the tail (Hey, when I hate a movie I hate it) and slightly under represented on the head (Hard to find a perfect 10 IMHO).