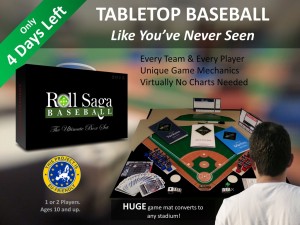 Have you ever noticed how some sports are more geek inclined than others?  Baseball is a geek’s dream with all the stats and science that can be done behind the scenes.  Tonight the geeks had the chance to talk (or argue) sports with Jody Pike, the creator of the game Roll Saga Baseball.

Games like Chess, a spelling bee, etc may or may not be sports (the geeks certainly argue that point) but how about a game like pool?  The professionals really work at their craft, and there certainly is a physical aspect to the game, although not as much as say tennis.

Baseball obviously takes a front and center role with both the geeks and Jody, and any true geek can never talk enough baseball.  The gang could have gone all night on the subject it seems!

What is Roll Saga Baseball?

Best to read it right from the creators we think!  From their Kickstarter page “Roll Saga Baseball is a tabletop baseball game that merges statistical baseball strategy and action. The traditional elements of tabletop baseball reside in game play as the manager builds, manages, and plays a team in the field using player stats, but the game mat transforms into any stadium to bring that ballpark’s added dimensions to the game. And not just players and managers make the game super-realistic, but coaches, player agents, and umpires are used to add multiple layers of depth and strategy.”

Some of the things we found very intriguing were ballparks, injuries and even umpires were all taken into consideration.  There are very few if any games that have that kind of depth.  But before you think the game would take forever to play, there are several play modes that can have a game be very short, or one that plays more like a real baseball game (several hours).

We can’t wait to get our hands on it.  Do you think there will be a Roll Saga Football???  We certainly hope so!

You can find Roll Saga Baseball on Kickstarter here: https://www.kickstarter.com/projects/rollsaga/roll-saga-baseball/ or at http://www.rollsaga.com/ 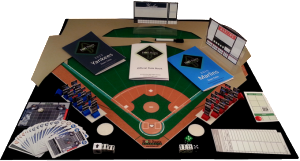