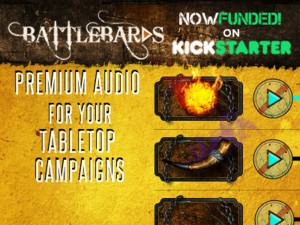 Tonight on Geekline415 the guys from BattleBards Premium Audio for your TableTop re-joined us for the rematch of Name that Tune!  We had great feedback about the first round we couldn’t resist trying it again.

BattleBards KickStarter is about to close out.  There are only 5 precious days left!  We thought it would be a great time to have them back on to have some fun before the real work begins.

BattleBards also dropped some GREAT news on the community!  You heard it here first on Geekline415!

BattleBards will be teaming with Dwarven Forge (http://www.dwarvenforge.com/)!   Together this bring a premium audio experience to the already stunning visual experience provided for Dwarven Forge.  This type of partnership brings an entirely new depth to the gaming experience.  Marrying the visual and audio together brings not only a more immersive experience, but an entirely new experience to your table top game.  We look forward to hearing more about how this will work out in the coming months!

BattleBards also imparted another great surprise, but you’ll have to listen to the show to learn more about that.  Let’s just say that it involves a top notch voice-over professional.  He is donating his work to the BattleBards playlist.  This will be available for all supporters at the Kickstarter Demi-god tier and up.  That is GREAT news for many of us that have heavily supported BattleBards Premium Audio.

During the championship bout, with little fanfare or surprise, Team 1 crushed it.  Team 1 is made up of: Alex “The Sultan of the Soundscape” Jarzebinski, Mike “The Archduke of Ambiance” Adams, Redshirt “All 20s” Butler and “The HalfOrcMan himself” Sundance.

What is BattleBards Premium Audio for your Tabletop? 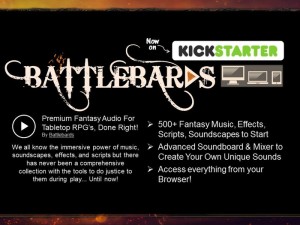 Best described by the team behind BattleBards itself we think!

“Battlebards is the most expansive tabletop audio library and tools ever assembled that is entirely accessible through your browser.”  There will be over 500 tracks just to start.  The team behind BattleBards Premium Audio plans to bring new and exciting sounds month after month.  Some of the coolest things have been the community getting a chance to vote on what sounds come next!

BattleBards covers everything from voice overs to soundscapes to their very own “monsterscapes”.