Tonight the geeks got the pleasure of talking to one of the TSR immortals: Bruce Heard.  Bruce has embarked on a new journey as he recently rejoined the RPG community with his new work: Calidar, In Stranger Skies.  Our resident artist Nino probably said it best when he referred to Bruce Heard as “The OG” (original gangster for those not up on hip-hop slang 😉 )

Bruce is the creator of Voyage of the Princess Ark from Dragon Magazine, and the man behind Mystara and all that it became in the TSR heyday.  The geeks had a chance to sit down with Mr. Heard joining them from his home in Wisconsin and talk some old school Dungeons and Dragons…… MONSTERS.  Some you may have never heard of, or some you thought might be under appreciated or under utilized, the geeks and Bruce talk all kinds of baddies that you may or may not have thought of as being all that, but, they are!

The geeks (and you as a listener) are also treated by Bruce to one of the greatest D&D stories ever told, and they have coined it: “The tale of the Mule”.  You’ll have to tune in to the 39:30 mark to hear TrunkMonkey start off with what you think is an innocuous beast: The horse… and then listen to Bruce recount his memories of one of his past D&D adventures.

Where can I find Bruce Heard and Calidar In Stranger Skies?!

You can find Bruce and his extremely organized blog at: http://bruce-heard.blogspot.com

After a very successful KickStarter, the world got introduced (or re-introduced) to Bruce Heard and his love and fascination for flying ships (Something else he coincidentally tells the geeks all about during his interview).

Currently, Bruce’s work on Calidar is nominated for the 2014 Golden Geek Awards at BoardGame geek under the RPG Supplements Category.  You can see it here: http://boardgamegeek.com/thread/1317685/2014-golden-geek-awards-nominees-announced-vote-no and don’t forget to vote for Calidar!!!!!

You can find Bruce’s work for sale on DriveThruRPG at a GREAT price for work of this caliber.  Throw a label on it from a famous toy company and they would easily charge you double.  Calidar is a favorite around the geeks table. 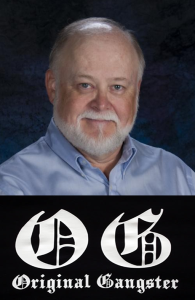 4 comments to Bruce Heard the OG & Calidar In Stranger Skies