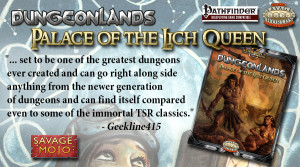 When we talked to Loki from Savage Mojo about joining us for our yearly geek test, he mentioned he would love to have a geek friend of his join us, and of course, we were game.  Little did we know that the geek would a ringer!  Owen Stephens (for those of you who forgotten) is a developer for Paizo publishing.  But that isn’t all.  Owen is also the Freeport developer for Green Ronin as well as the owner and publisher of Rogue Genius Games.  That is a heck of a lot of RPG writer cred!

There are lot’s of exciting thing coming up from Rogue Genius games that Own goes over.  We are most excited by the Pathfinder feats compendium they are putting together.  How many times has some one at a con pulled out a feat you’ve never heard of?  This will finally bring many of those feats into one place that is easy to find.  Plus, when you listen to the show you can find out more about their old west themed series coming out, this a DM favorite.

We haven’t caught up with our old friend Loki from Savage Mojo for a while and we thought it would be a great time to bring him on to talk about all the new exciting stuff coming out for Suzerain.  The new Pathfinder rules for Suzerain are due out any time!!!!  There are of course a ton of other great products from Savage Mojo coming out real soon but you’ll have to listen to the show to find out which.

What was the Geek Test?

Well the geeks take the test together, and hilarity, failure, a few “doh!”s and some righteous victory ensues.

Listen along and see how YOU score….