PostHuman and the end of the world with Gordon & David 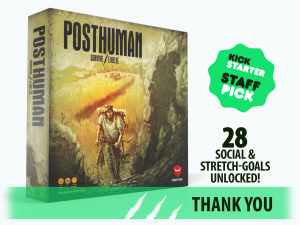 We’ve all wondered what would happen if the world ended?  We might have all “hoped” the world ends, or anarchy breaks out as TinKnocker mentions in the first 5 minutes.  There have been many movies, TV shows and books based around this very subject.

How the end draws nigh is what sets these stories apart.  Is it the zombie plague yet again?  Or is it something more nefarious.  Something slower, something we may not even notice.  Once we are gone what happens to the world as we know it?  Does nature reclaim everything?  Are we no longer masters of our planet?  It would stand to reason once we stop being able to effect and shape our environment as much, nature would take over.

The creators of the board game PostHuman, Gordon Calleja and David Chircop, joined the geeks tonight to talk end of the world influences from movies, books and TV.  The gang talks about everything from 28-days later, to World-War-Z.  Books like The World without Us by Alan Wiesman, play a heavy roll in the game PostHuman.  Books like this offer an interesting looking at what might happen to a world where humans cease to exist.

What is this game PostHuman?

If success is measured by a Kickstarter goal, then PostHuman is a runaway!  PostHuman is going to be the newest board game you’ll see played at gaming conventions all over the world.  Obviously by the world we mean the United States, but that should be clear to all our readers by now.

PostHuman is not yet another zombie survival game which seem to be overloading the market these days.  Over 5000 people backed this game which is an indicator of the demand for this kind of game.

In PostHuman you play as one of the last remaining human survivors taking a long and lonely journey to find sanctuary in the mysterious “fortress”.  We as mankind have ourselves caused our demise as is the typical folly of man.  Nature is reclaiming the planet and the offspring that we created are out to kill us.  These genetically modified humans, also called mutants in the storyline, are inheriting the earth before our very eyes.

The game has several possible outcomes, from survival, to death, to actually becoming a mutant yourself.  The game can be played with up to 6 players, but can also be played solo.  This type of dynamic game play is rare for a game of this caliber.

In the game, everyone starts as human and “winning” is an individual effort.  Throughout the course of the game you may end up turning into a mutant.  Suddenly “winning” becomes a collective effort.  In larger games you may find yourself as the lone human survivor.  This would mean every other player that surrounds you is a mutant.

You can find out more about PostHuman by visiting the Mighty Box Games website: http://www.mightyboxgames.com/games/posthuman-boardgame 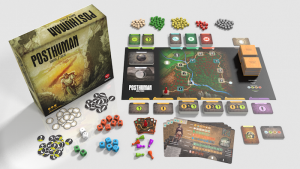