With great anticipation and some sadness, Volume 1 of the Salvagers series, Abandon Cargo, will come to a close.  The fourth and final installment is just a few short weeks away and we can’t wait to see what happens to Brigby….. oh, and the rest of the crew, and story, but mostly Brigby…. not really…. actually yes…. 😀

The good news is however, the Carlyle Group has given their consent for Bob to run his Indiegogo campaign for Jasper’s StarLight Tavern!  We talked about Jasper’s back in April and you can find that episode here.  You can find this campaign at https://www.indiegogo.com/projects/jasper-s-starlight-tavern  Revealed in this episode, if you listen very carefully, you’ll get to the understanding that the owner of Jasper’s is none other than Keyser “Brigby” Soze himself.  Jasper’s is merely a front…. but we’ve already said too much.

What is this about the Carlyle Group you might ask?  The geeks have relayed their belief that the shut down of the Abandon Cargo series is actually a conspiracy put forth by a joint venture between DC, Marvel and Dark Horse.  The shell corporation, better known as The Carlyle Group, is actually responsible for the sequestration of numerous comic book series that they deem a threat to the portfolios of Disney, Warner Brothers, and Dark Horse.  While the Carlyle Group bills itself as a “Global asset management” company, with their own private army stationed in the Haiti, disguised as “relief workers” incidentally, many in hushed circles tell of their nefarious dealings in the worldwide comic trade.

What this dastardly corporation could have threatened Bob Salley with to get him to end the series we are sure he will never reveal.  So instead of grilling Bob for information on Salvagers he will never reveal, the geeks decide to discuss “Conspiracy Theories” in general, rather than revealing their secret on-air for the world to find out.  Purely for Bob’s sake, we hope you do not speak about this to your friends.  He has a family people…. please.

Where can I catch up on Salvagers?

Salvagers is now available on Comixology, or you can get a signed copy (like we have) or a T-shirt or other really cool stuff from http://www.salvagers.bigcartel.com/ 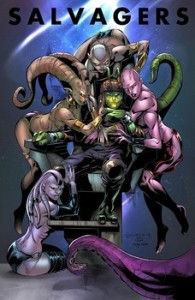