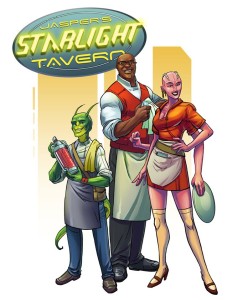 Tonight the geeks were joined by Bob Salley and Jason Sparich of Jasper’s Starlight Tavern!  The gang decided to talk about their takes on female heroines.  It would seem, there are either not enough, or too many “throw away” characters.  Apparently only Nixon can go to China.  While there can only be one Wonder Woman, the gang scratches their head as to “Why can’t the 4-armed girl in Jasper’s Starlight Tavern” open a damned jar?

Bob is running his latest Kickstarter for the final installment of The Salvagers: Abandoned Cargo.  The story takes place right after the third comic ends.  The crew is forced to take on a high-risk salvage job.  Why?  Because our friend Brigby has gotten himself into a pickle.  All the BOSS in the world, and Brigby can’t seem to stay out of trouble.  TinKnocker recommends that he start visiting his local Gambler’s Anonymous chapter.  Blackbane security droids and nowhere to run assure us this installment will be epic!  We will of course demand more of Bob for this crew.  Bob, the crew isn’t finished!

What exactly is Jasper’s Starlight Tavern?

Starlight Tavern is a weekly comic published for free on their website.  Jasper’s Starlight Tavern is placed inside the Salvagers universe.  As described by Jason, think Cheers meets the Star Wars cantina.  It is a place where every ne’er-do-well (except synthetics) can come to enjoy a bite to eat or a drink and possibly run in to a few Hollywood stars along the way.  DungeonMaster said it right when he said that besides Cheers and the cantina, there is definitely a Planet Hollywood vibe going on.

Starlight Tavern is a satirical look at many different celebrities and how they would fit in to a world like Salvagers.  Take note however…  The stormtrooper looking guys can’t be drawn as such.  DAMN THAT MOUSE!

You can find the Kickstarter for the final installment of Salvagers here: https://www.kickstarter.com/projects/535592388/salvagers-abandoned-cargo-4

And you can visit Jasper’s Starlight Tavern every week at: http://www.starlighttavern.com 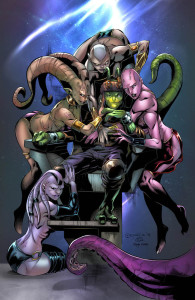