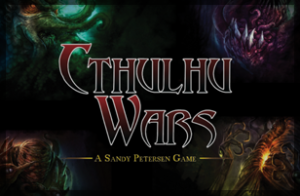 We’ve all played a Table Top RPG, or a video game, or watched a movie where we thought, “Gee, I didn’t see that coming!”.  Cthulhu was one of those tales that no matter how prepared you were, you could not see it coming.  What better person to talk surreal surprise than Sandy Petersen of Cthulhu Wars!

The geeks had the distinct honor of talking some Cthulhu with Sandy, as well as about some of his new games.  The real treat is Sandy will be showing off some of his new games, such as The Gods War, at Celestion!  Celesticon is coming up on labor day weekend here in the sunny Silicon Valley in California.  Geekline415 is a sponsor and we hope to see you there.  You’ll get a chance to meet Sandy Petersen and lots of other really great folk.

Who is Sandy Petersen?

While normally we would admonish you and demand you turn back in your geek card, we do understand that it is possible, in some dark corner of the RPG world, some may not have heard of Sandy Pertersen.

Sandy Petersen is the “god father” of the everything Cthulhu has become since the 80s.  We do not think this is overstating the point.  Sandy was the lead author of Chaosium’s flag ship game “Call of Cthulhu”.  He went on to work for ID Software on Doom and Doom II, and later for other studios including working on Age of Empires and even an IOS release of Osiris Legends by Barking Lizards.

Sandy had a hugely successful Kickstarter campaign that raised $1.4 million dollars for his hit game Cthulhu Wars.  Finally, a game where you get to fight over who gets to create the most doom!!!!!  You can find out more about Cthulhu Wars at: https://petersengames.com/product/cthulhu-wars-core-game/

One comment to Sandy Petersen talks Cthulhu Wars and more!