Faith the Sci-fi RPG and Most Influential RPGs 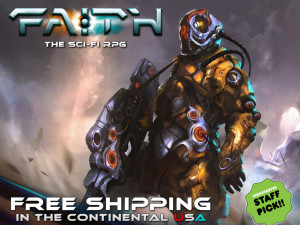 Joining the geeks tonight, all the way from Santander Spain (where the beaches are nicer than he rest of Spain we are told 😉 ), were Carlos and Helio, the creators of Faith The Sci-fi RPG from Burning Games.

As geeks, we all had certain RPGs, video games, table top, and all kinds, that influenced us.  Tonight the geeks take on the topic of Most Influential RPGs, at least as they see them and Carlos and Helio join in on the fun.

Everything from GURPs to World-of-Warcraft is on the table.  Computer based or table top, the geeks get a chance to talk to newest wave of RPG designers from Burning Games about what may have influenced them and then influenced the geeks themselves back in the day all the way to present time.

What is Faith the Sci-Fi RPG ?

Faith The Sci-Fi RPG can be best described as the pen and paper table top RPG, that requires no pen, and no paper.  As the creators put it, “The art is on the table” and nothing could be better in our opinion.

Faith is an open, free-flow RPG that takes away some of the intimidation of current RPGs.  The days of 3-page character sheets, myriads of dice, and 37 books and updates you need to download are over.  Faith replaces it with a simple, on-the-table system that allows you to get right to what is important in any RPG, the story.

Faith the Sci-fi RPG keeps to the history and richness of typical RPG.  With the tried and true conflict/situation story telling, followed by resolution, Faith keeps the mechanics simple enough for a beginner to join in and get playing immediately.  By removing a lot of superfluous items and extras that many RPGs have come to rely on as gimmicks, Faith straightens the road and allows everyone to get involved no matter there level of expertise or experience with RPGs.

The guys from Burning Games had an excellent quote from a fan that he even got his girlfriend to try the game because it did not seem as overwhelming as other RPGs.

When asked after the show about Faith, DungeonMaster put it simply: “Oh, we WILL be playing again”.

You can find out more about Faith the Sci-Fi RPG at:

or visit their Kickstarter at: 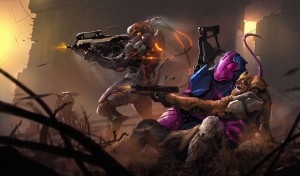