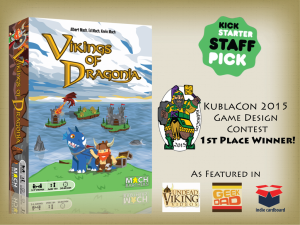 Have you ever played a game, watched a movie, or read a book where there is just an epic battle scene?  Where you can’t wait for what happens next?  Tonight the geeks are talking with Albert and Ed Mach, 2/3rds of the Mach Brothers!  The Mach Brothers are the creators of the a new game on Kickstarter right now called The Vikings of Dragonia.  Together, the gang is talking about epic battle scenes that they remember from TV, movies, and all kinds of media.

Remember the scene from the 1995 movie Braveheart?  You know, the one with the word famous drunkard Mel Gibson where he rallies the troops to fight out one of the most epic battle scenes ever put on film?  With a ton of great ones like that it was hard to narrow it down to just a few.  The Chinese cinema favorite Red Cliff even gets a mention.

What is Vikings of Dragonia???

Vikings of Dragonia is one of those games that is poised to be an epic battle in and of itself.  Two to five players square off in a challenge to control land, earn honor points, and, our favorite part, kill each other!  We are sure this game will make the next installment of “Dick Moves” because it is ripe to really mess with your friends.

From their Kickstarter page: “Vikings of Dragonia is a strategic board game of area control and hand management.  Players lead their own Viking clan and compete to gain the most Honor and treasure through occupying islands and battling with your opponents. Players can also control the Wild Dragon to protect their islands and prevent opponents from collecting treasures!”

We had our first chance to play this board game at Kublacon. We can attest as to why it won 1st place in the game design contest.  The game is solid, well polished, and ready for prime time.  With ~45 minutes to 1 hour game time, the Vikings of Dragonia can fit in on any board game night, and no two games will ever be the same.  With a mix of strategy and a bit of random card drawing, you can find yourself sitting on top of the world one moment, and sunk to Davy Jones’ locker the next…. and we love it!

You can find out more about Vikings of Dragonia by visiting their Kickstarter page at: https://www.kickstarter.com/projects/761929008/vikings-of-Dragonia

You can also attend one of their events in the Bay Area California this Saturday night in Berkeley.  It’s an event hosted by Games of Berkeley, who the Mach Brothers partnered with to host Viking Fest.
https://www.facebook.com/events/399457470225692/ 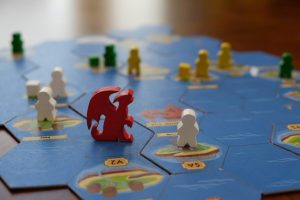